Gender Representation on Public Boards (Scotland) Act 2018: For Women Scotland unsuccessful in their second action against the Scottish Government 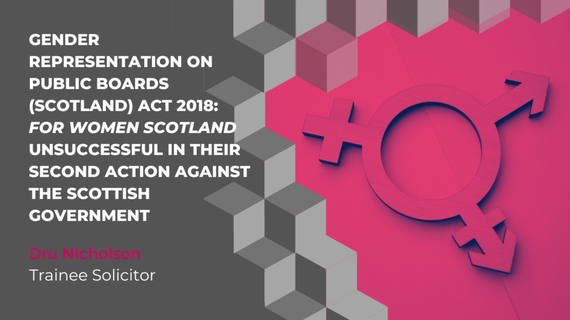 Following the raising of a second judicial review action by For Women Scotland in relation to the Gender Representation on Public Boards (Scotland) Act 2018, the Outer House of the Court of Session issued judgement on 13th December 2022 holding that a transgender woman in possession of a Gender Recognition Certificate (GRC) can be defined as a “woman” for the purposes of the 2018 Act.

The 2018 Act was introduced with the objective of ensuring a 50-50 gender balance of non-executive members on public boards in Scotland. For Women Scotland took issue with the 2018 Act’s definition of a ‘woman’ and sought judicial review accordingly. The Equality Act 2010, introduced by the UK Government, regulates equality measures in Scotland. Equality matters are reserved to Westminster meaning the Scottish Parliament cannot legislative contrary to the 2010 Act. The Scottish Parliament does, however, have devolved power to legislate for positive action measures around the composition of public boards. For Women Scotland’s original judicial review action was founded on the argument that the definition of woman used by the Scottish Government in the 2018 Act was not harmonious with the 2010 Act and the Scottish Government was therefore acting beyond its legislative competence.

In 2021 the judge at first instance ruled in the Scottish Government’s favour, finding that the 2018 Act did not re-define a ‘woman’ for any reason other than to allow transgender women to benefit from the positive measure. EU law supported the proposition that transgender people were to be considered of the sex to which they had re-assigned in discrimination matters. For Women Scotland nevertheless successfully appealed the decision at first instance. The Inner House of the Court of Session ruled that the 2010 Act clearly separates sex and gender reassignment as two distinct protected characteristics. The Court stressed that the appeal judgement was exclusively about interpreting the law in relation to the legislative competence of the Scottish Parliament and not about the separate policy issue of transgender rights.

As a result of For Women Scotland’s successful appeal, the Scottish Government revised the 2018 Act to clarify that the definition of ‘woman’ stems from the Equality Act 2010 and the Gender Recognition Act 2004. Their accompanying guidance, however, stated that:

In effect, the guidance meant that a transgender woman with a GRC would be considered a ‘woman’ for the purposes of the Act. For Women Scotland responded by raising a second judicial review action, arguing that the guidance was not in accordance with the separate definitions of women and transgender woman in the Equality Act 2010. They also expressed concerns about the broader societal impact on single-sex spaces.

On 13th December 2022, Lady Haldane’s judgement in favour of the Scottish Government was issued. Lady Haldane sustained Ministers’ arguments and stated that:

“The meaning of sex for the purposes of the 2010 Act, 'sex' is not limited to biological or birth sex, but includes those in possession of a GRC obtained in accordance with the 2004 Act stating their acquired gender, and thus their sex."

Lady Haldane made clear that she referred only to the Scottish Government’s legislative competence in this specific case and her judgement should not be considered a ruling on the wider rights of transgender people.

The Scottish Government maintains that making it easier for transgender people to obtain a GRC will not impact the protections enshrined for women in the Equality Act 2010, including those regarding single-sex spaces. Discussions around this sensitive topic will continue in the Scottish Parliament.