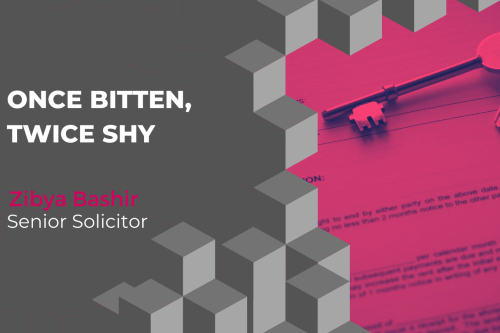 Fast forward over two years later to March 2022 and the case of Rafique v Morgan where an appeal by the landlords to the housing division of the Upper Tribunal for Scotland has been rejected.  The appeal was to the effect that the First Tier Tribunal for Scotland (Housing and Property Chamber) (“FTT) had incorrectly refused to grant an eviction order in favour of the landlords against the tenant who was in rent arrears.

The tenancy was a private residential tenancy which commenced on 28 September 2020. Only the first month’s rent was paid by the tenant and so the landlords served a Notice to Leave on the tenant dated 30 December 2020 relying on Ground 12 - rent arrears.  Whilst the tenant was given the requisite six months’ notice terminating the tenancy, the Notice to Leave was served on him when he was two months in arrears and not three consecutive months as the governing legislation states.

It was submitted for the landlords that the provisions of the governing legislation did not support the Upper Tribunal’s decision in Majid v Gaffney that the eviction ground relied on had to apply at the time the Notice to Leave was served on the tenant. In other words, the landlords’ argument was that as long as the tenant was in arrears when the Notice to Leave was served, it did not have to be three consecutive months of arrears at that time.

In essence the landlords were speculating that at some unspecified point in time in the future the arrears would accrue over three consecutive months entitling them to serve a Notice to Leave on the tenant when the arrears were less than three consecutive months.  Not surprisingly the court rejected this argument taking the view that the landlords’ interpretation of the statutory provisions renders the service of the Notice to Leave as a procedural nicety or technicality devoid of any real meaning or effect when it is served.

The court also made clear that it agreed entirely with the Upper Tribunal’s decision in the Majid  v Gaffney case.

Understandably landlords will be frustrated that they cannot take immediate action when a tenant is in arrears but now more than ever it is important that landlords ensure their tenant(s) is/are in rent arrear for three consecutive months before serving a Notice to Leave otherwise they’ll find themselves on the wrong side of the law.