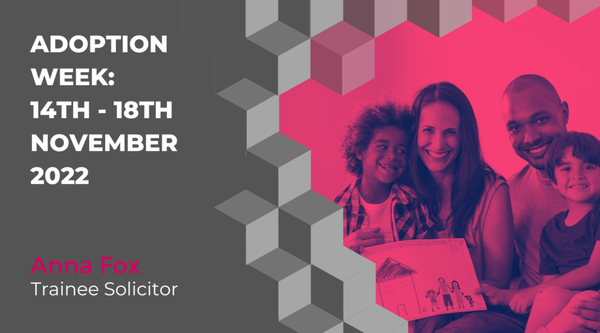 Adoption Week will take place between 14th and 18th of November this year, the aim of which is to celebrate adoption in Scotland. It is funded by the Scottish Government and managed by Association for Fostering, Kinship and Adoption (AFKA) Scotland, Adoption UK (AUK) in Scotland and Scottish Adoption Register (SAR).

There will be a number of events throughout Adoption Week, a list of which is available here: Adoption Week 2022 - Adoption_Scotland_New. To aid those looking to adopt and raise awareness, we have put together a fact sheet on adoption and the adoption process in Scotland.

Adoption is the legal process by which all rights and responsibilities relating to a child are transferred to the adoptive parent(s) from the child’s natural parent(s) by way of a Court Order.

Adoption is a permanent decision.  The birth parents’ rights are extinguished upon the making of the adoption order, if they were not already extinguished by virtue of a permanence order having been granted previously.

In Scotland there can be no payment for adopting a child.  There may of course, however, be indirect costs to consider such as adoption agency fees, solicitors fees and court fees.

Requirements to adopt in Scotland:

Any child under the age of 18 who has never been married or in a civil partnership can be adopted.

Step 2: If the petitioner(s) wishes to apply to the court for an adoption order, they must first intimate their intention to do so to the local authority within which they reside. The local authority or the adoption agency will prepare a report which will detail the whole circumstances of the child and the petitioner(s) and will indicate whether the adoption order is supported.

Step 3: The adoption petition is prepared by a Solicitor and will be lodged with the local Sheriff Court along with the report from the Local Authority/Adoption Agency. The court must then decide whether the petition requires to be served on the child’s birth parents and the child. The court will fix a Preliminary Hearing and appoint and an independent Solicitor who will prepare a further report on the child’s behalf.

The birth parents and children aged 12 and over must provide their consent to adoption.  The court can dispense with parents’ consent in certain circumstances, for example, if they are deceased or have been deemed unfit to care for the child.

If no opposition is lodged and the birth parents either consent to the adoption or the court dispenses with their consent, the Court can grant the Adoption Order.

What happens if the adoption is opposed?

If the adoption is opposed, then a statement of facts must be lodged by the petitioner(s) and answers will need to be lodged by the birth parents. At the Preliminary Hearing the court is involved in case management to ascertain the issues in dispute. A pre-proof hearing will be assigned after the Preliminary Hearing to discuss the parties’ preparations for proof. If the case has not resolved by agreement, a proof will be assigned where witnesses will be called and evidence led.

At the conclusion of the proof, the Court will decide whether or not to grant the petition for adoption and, if so, will make a decision on any post-adoptive contact between the child and their birth parents. If the adoption is granted, the adopter(s) become the child’s new legal parent(s). Contact will then take place between the child and their birth parents in accordance with any Court Order granted.

If you are interested in or currently going through the process of adopting a child in Scotland and require legal advice, please contact a member of our Family Law Team today to discuss how we can assist you.

More posts from author
Friday, 25 November 2022 Getting on the ‘property ladder’: A guide for first time buyers in Scotland
Friday, 11 November 2022 MSHB ARE DELIGHTED TO ANNOUNCE TOP RANKINGS IN CHAMBERS AND LEGAL 500 GUIDES
Thursday, 27 October 2022 Licensing Board Policy Consultations 2022/2023