What’s Next in Diversity and Inclusion? A Move Towards ‘Inclusive Britain.’ 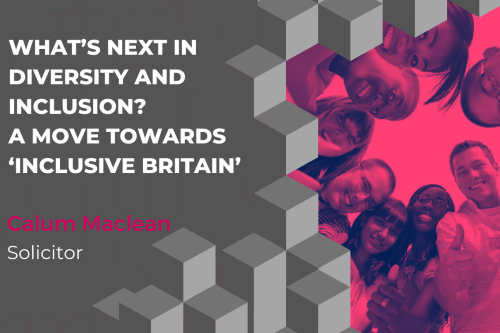 Following the events of 2020 and in light of the hugely notable Black Lives Matter movement the UK Government recognised that action ought to be taken to address some significant disparities and injustices within the United Kingdom.  While the Government stated that they felt that there had been many advances in addressing these it was noted that more could be done.  With that in mind, the Commission on Race and Ethnic Disparities (the Commission) was formed with the goal of looking at ways to resolve racial and ethnic inequality within the United Kingdom.

In March 2021 the Commission produced a report setting out a not less than 24 recommendations for creating a greater level of equality within the United Kingdom.  This month, the Government produced their response to that report titled ‘Inclusive Britain.’

Below, we will look at some of the main recommendations from that report and how the Government intends to address these.

On review of the Commission’s report the Government has elected not to put in place mandatory ethnicity pay gap reporting and rather, allow this to be completed on a voluntary basis.  Speaking to the reason for not making this reporting mandatory the Government has said that they ‘want to avoid imposing new reporting burdens on businesses as they recover from the pandemic and so we will not be legislating for mandatory reporting at this stage, rather we will support employers with voluntary reporting.’

While this notion may be one which is welcomed by businesses at a time where indeed, many are recovering from the pandemic, the issue here is that it seems somewhat unlikely that many will be flocking to voluntarily provide ethnicity pay gap reports given the administrative burden which will no doubt accompany carrying this out.  While some may take the view that producing the report is the right thing to do, the Government have said that anyone who does produce voluntarily an ethnicity pay gap report will be required to publish an accompanying diagnosis and action plan which details the reason for the pay disparities as well as stating what tangible measures the company will take to address these.

Of course, it stands to reason that there is little point in reporting a pay gap only for the sake of stating that it exists, however, I question whether it would have been more appropriate to introduce mandatory reporting but only, for example, for businesses with over 1,000 employees in order to minimise the impact on businesses recovering from the pandemic.  That being said, this decision may be welcomed by a number of employers, allowing them to decide when they feel it is appropriate to carry out this type of exercise (if at all).

The Government’s Equality Office have stated that they will also issue new guidance on positive action by the end of this year.

The Equality and Human Rights Commission are reported to be due to receive a greater level of funding and greater powers to enforce and challenge race discrimination.  What these powers will entail remains to be seen however a new “Inclusion at Work” panel will be put in place by Spring 2023 to develop and disseminate resources and oversee research and workplace trials.

Changing the Language in respect of Ethnic Minorities

The Government has suggested that it will cease using the term “BAME” to describe people from ethnic minority backgrounds.  BAME stands from, Black, Asian or Minority Ethnic’ and it has been suggested that it would be prudent to consider inequality and disparity in reference to specific ethnic groups rather than using a ‘catch-all’ term.  The Government states that the term ‘people from ethnic minority backgrounds’ will be used where it is absolutely necessary to identify a collection of people formerly recognised under the “BAME” banner.  Given that the Government is taking this decision it seems likely that employers will be expected to follow suit and therefore it would be prudent for employers to consider a revision to their own handbooks/ policies which may make reference to “BAME” employees.